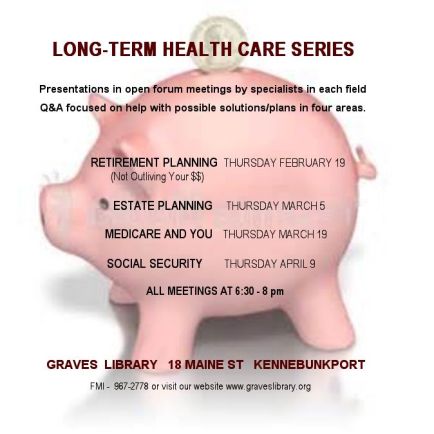 Thursday, February 19, 6:30-8 p.m., Long Term Care and You – Retirement Planning. The Louis T. Graves Memorial Public Library is hosting a series focusing on long-term care, medicare, retirement planning, estate planning and social security. Each meeting will be offered in an “open forum” format with a specialist in his/her appropriate field of expertise. These individuals will be here to answer your questions and help create a plan to protect you and the ones you love. No registration required. The Library is located at 18 Maine Street, Kennebunkport. For further information, please call 967-2778 or visit our website athttp://www.graveslibrary.org. 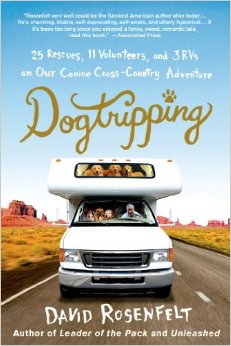 Dogtripping: 25 Rescues, 11 Volunteers, and 3 RVs on Our Canine Cross-Country Adventure by David Rosenfelt

David Rosenfelt’s Dogtripping is moving and funny account of a cross-country move from California to Maine, and the beginnings of a dog rescue foundation

When mystery writer David Rosenfelt and his family moved from Southern California to Maine, he thought he had prepared for everything. They had mapped the route, brought three GPSs for backup, as well as refrigerators full of food, and stoves and microwaves on which to cook them. But traveling with twenty-five dogs turned out to be a bigger ordeal than he anticipated, despite the RVs, the extra kibble, volunteers (including a few readers), and camping equipment. Rosenfelt recounts the adventure of moving his animal companions across the United States with humor and warmth, and tells the tale of how he and his wife became passionate foster parents for rescue dogs, culminating in the creation of the Tara Foundation and successfully placing several thousand dogs with loving families [F-Inside cover].

Packed with beautiful, breathtaking full-color photographs, Unlikely Loves is a celebration of love between species. Here are stories of parental love, like the Dalmatian who mothers a newborn lamb—a lamb that just happens to be white with black spots! Stories of playful love, including the fox and the hound who become inseparable. And stories of orphaned animals who have found family-like ties in unexpected combinations, like the elephant who’s bonded with sea lions, goats, and other animals in her walks around the Oregon Zoo.

Ms. Holland has interviewed scientists, zoologists, and animal caretakers from around the world, tracking down firsthand sources and eyewitnesses. The stories are written with journalistic integrity and detail—and always filled with the author’s deep affection for her subjects  [F-Inside cover].

Posted on February 9, 2015 by Graves Library 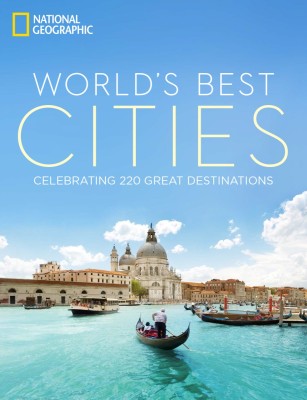 Discover the greatest cities on earth. Welcome to the world’s greatest urban destinations. You’ll find an astonishing array of metropolitan meccas, massive and minute, ancient and spanking new, united in their originality and energy. The expert editors and award-winning photographers of National Geographic have selected the world’s most captivating cities, with tips on the best food, shopping, local secrets, urban oddities, and icons, all presented with unparalleled imagery.

Discover small finds in the world’s largest city, Tokyo, and great secrets of the planet’s smallest metropolis, Vatican City. From the back alleys of San Francisco to the cosmopolitan streets of Cape Town, immerse yourself in what’s new, what’s hidden, and what’s irresistible about the extraordinary cities.

World’s Best Cities taps into the heart and soul of 220 great cities around the planet [F-Inside cover].

Posted on February 8, 2015 by Graves Library

Image | Posted on February 8, 2015 by Graves Library | Leave a comment

Posted on February 7, 2015 by Graves Library 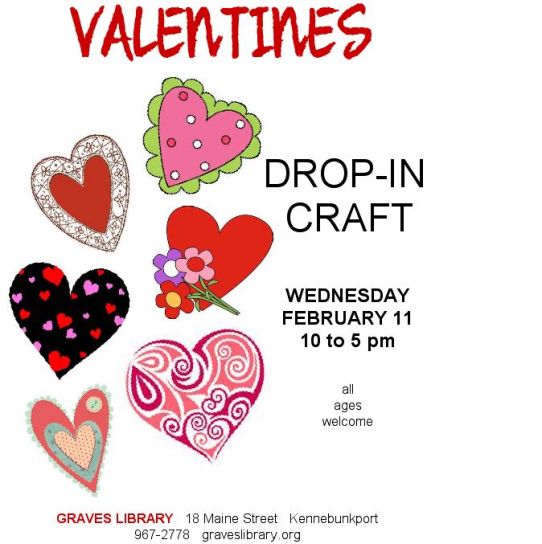 Wednesday, February 11, 10 a.m.- 5 p.m.,  Drop-in craft day in the Junior Room at Louis
T. Graves Memorial Public Library. We will provide all materials for a Valentine craft.
For all ages. Young children must be accompanied by an adult. No registration required.
The Library is located at 18 Maine Street, Kennebunkport. For further information, please
call 967-2778 and ask for the Junior Room or visit our website at
http://www.graveslibrary.org.